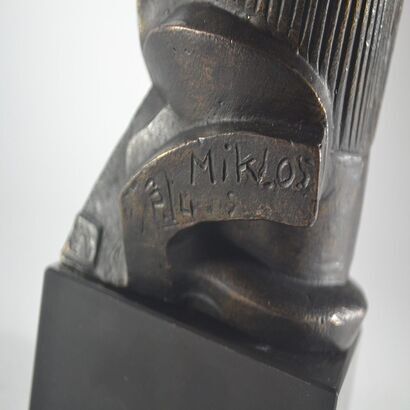 Who was Gustave Miklos?
Gustave Miklos was born in 1888 in Budapest where he studied decorative art. He arrived in Paris in 1909 and worked under the direction of Metzinger and Le Fauconnier. Gustave Miklos achieved artistic recognition after the First World War thanks to his meeting with Jacques Doucet, who commissioned him, among other things, to produce goldsmith's and silversmith's pieces, enamels, carpets, etc. He took part in the 1925 Decorative Arts exhibition with his reliefs. He died in France in 1967.
The bronzes of Gustave Miklos cast by Valsuani (during the artist's lifetime), are sold for several hundred thousand euros and can sometimes reach a million euros.
After the death of Gustave Miklos, some sculptures were cast by Godard, usually in a small number (four copies). Their prices are, in general, several tens of thousands of euros.
Even if we rarely see in auctions, the bas-reliefs of Gustave Miklos, these are very important in his work: they appeared at the famous exhibition of Decorative Arts in 1925. They are generally in copper and their estimates are, for the small ones, around 6.000 € and for the big ones, 10.000 €, 30.000 €, even 60.000 €.
The record price for a sculpture by Gustave Miklos is € 1,400,000 for a large bronze (150 cm) from 1927.
Paintings, now: prices are extremely fluctuating: if some paintings from the years (19)20 reach several thousand euros others reach a few thousand euros.
Note that the record price for a painting by Gustave Miklos is close to €150,000 for a large canvas nearly two meters high.
As for drawings, gouaches ... the prices vary from a few hundred euros to a few thousand euros depending on the subject, the technique and the dimensions. Let us note some cubist gouaches sold between 50.000 and 80.000 €.
Free estimate of your Gustave Miklos painting or sculpture