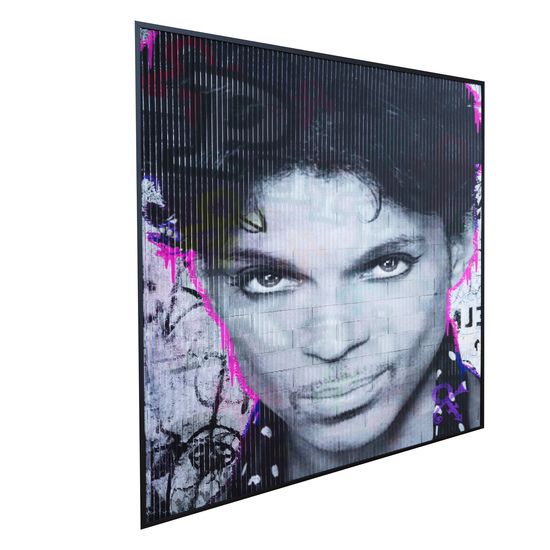 Born in 1960 in Paris, Patrick Rubinstein is a French contemporary artist from the world of fashion working his paintings on a concept of OPT ART, (Kinetic Art).
Thanks to an innovative technique his works offer you 3 different views according to your angle of vision, thus giving you 3 times more emotions.
You would like to find the idols of your youth? Patrick Rubinstein stages them for you by associating them by a unique optical game, to another image. For Michael Jackson? A graph of "Beat It" as a nod to his 1982 worldwide hit. For The Beatles? The Union Jack.
It all begins when Patrick Rubinstein is still a teenager. He loves art, film photography and kinetics. What to choose between the three? Nothing - that is, everything.
He cuts a photo into strips, interleaves it with another, then sticks the recomposed image onto a support, tries an accordion fold and obtains a work in relief. From the front, the image is double, the two photos are superimposed, but seen from perspective, the effect is bluffing. Depending on the angle, only one of the two images appears. His 3D concept was born.
His first creations are made from portraits of his relatives. A mother and her son, a brother and his sister, a father and his daughter... Soon, his visual game became a great success far beyond his entourage. He must continue - the question is how?! His technique is still too artisanal to support more sophisticated creations, a fortiori in XXL dimension.