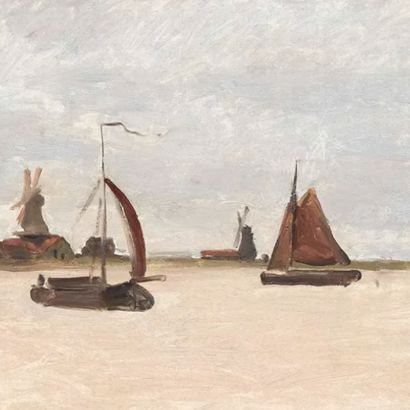 On the morning of August 15, tourists and residents of the town of Zaandam, near Amsterdam, were surprised by two gunshots.
Following a robbery at the Zaans museum, in broad daylight, an individual was seen riding a motorcycle driven by an accomplice with a work of art under his arm. One of the witnesses intervened to get the thief off the vehicle, who eventually dropped the painting and fled with a firearm. No one was injured and the two criminals left the scene empty handed. The motorcycle was found by police shortly thereafter, abandoned near the museum.
The work of art in question, De Voorzaan en de Westerhem, is a painting by the impressionist Claude Monet. The French painter stayed in the Zaan (or Zaanstreek) region from June to October 1871, drawing inspiration from its landscapes, boats and famous industrial mills built at the end of the 16th century. In total, Monet made nine sketches and 25 paintings during his four-month stay. De Voorzaan en de Westerhem has been owned by the Zaans Museum, an institution dedicated to the region's heritage, since 2015. Purchased for 1.16 million euros, it was the museum's most expensive acquisition at the time, and remains one of the centerpieces of its collection.
It is unlikely that the thieves knew the painting was just turning 150 and that the theft was related to the event. According to authorities, their approach was too disorganized to be a long-planned operation.
This theory is also supported by noted art detective Arthur Brand, who told NH News shortly after the incident, "They don't seem to be professionals. I can name a few things that gave them no chance to succeed. A lot of mistakes were made. First of all, the location is not favorable. You can't go unnoticed because there are many tourists who already have their cameras ready.