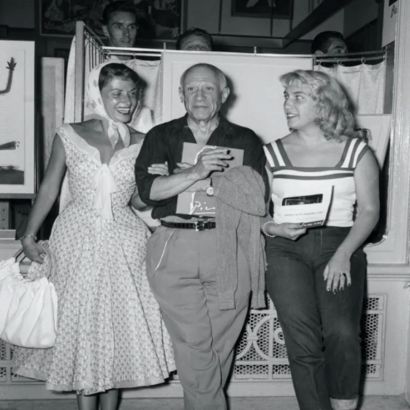 Picasso: an important dation from Maya to the French State


On September 20, Culture Minister Roselyne Bachelot and Economy and Finance Minister Bruno Le Maire announced that Pablo Picasso's daughter, Maya Ruiz-Picasso, would donate nine works from her father's collection to the French state.
This decision by Ms. Ruiz-Picasso would have been made in order to preserve her father's heritage for posterity, but also to settle an outstanding inheritance tax.
In 1968, the then Minister of Culture, André Malraux, introduced a law that allowed artists and their heirs to pay inheritance tax on an exceptional basis by handing over to the state cultural property recognized as being of high artistic or historical value.

The nine works include six paintings, one sculpture and a sketchbook by Picasso, as well as a Polynesian tiki sculpture from the Cubist painter's personal collection. The body of work illustrates the different phases of the artist's life: a portrait of his father Don José Ruiz, painted while he was still in Spain in 1895, a portrait of the mother of his partner Marie-Thérère Walter (1939), Child with a Pacifier Sitting under a Chair (1938), Study for a Mandolin Player (1932), El Bobo (1959), and finally Head of a Man from 1971. The sculpture La Vénus du gaz dates from 1945, the sketchbook from 1962. The works will be given to the Picasso Museum in Paris, which plans to exhibit them in spring 2022.
"Thus, this exceptional group of works by the artist that arrives today at the museum thanks to the dation stands out both as a reflection of a chronological overview of the work and as a masterful illustration of the diversity of media used by Picasso," said the Ministry of Culture in a statement.

The Picasso Museum, located in the Parisian palace of Hôtel Salé, opened in 1985. In addition to Picasso's works, the institution also holds pieces from his personal collection, which includes works by artists such as Georges Braque, Joan Miró, Amedeo Modigliani and Paul Cézanne. The interior of the Hôtel Salé was designed by Diego Giacometti for its opening.
The Maya Ruiz-Picasso donation is not the first of its kind to benefit the Picasso Museum. The first works of art added to the collection came from the 1979 donation, six years after the artist's death. Another followed in 1990 with pieces from the legacy of Picasso's second wife, Jacqueline Roque.