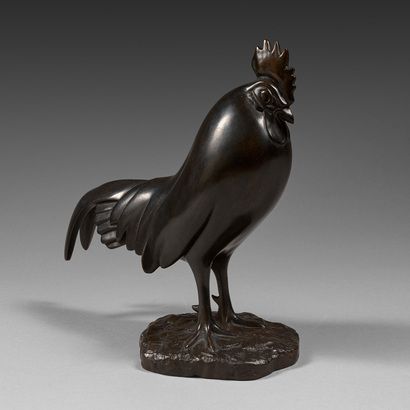 What is the value of François Pompon's sculptures at auction?

If the theme of Pompon's bear remains timeless - the last stone bear presented at auction reached more than 160,000 euros - many more unexpected subjects, such as the bestiary of birds, guinea fowl, coots, ducks attract collectors.
A marble goret was auctioned in 2022 at more than 115,000 euros. A unique and rare piece on the auction market.
Stags and panthers were once very fashionable, but still attract many collectors, but it is not Pompon's pieces that reach top prices, remaining in the range of 12,000 to 20,000 euros. An exception is the historic 1930 Great Stag, a unique piece that sold for over 600,000 euros against an estimate of 80,000 to 120,000 euros.
Rare subjects by Pompon immediately attract the attention of buyers, such as this crane at rest, which was sold in 2022 for over 65,000 euros.
Who was François Pompon?
François Pompon (1855-1933) was a French sculptor.
François Pompon was born into the soup as a child and began his career as an apprentice in his father's workshop, the latter being a carpenter and cabinetmaker.
Thanks to a grant given by a priest, François Pompon moved to Dijon and attended evening classes at the Ecole des Beaux-Arts in architecture, engraving and sculpture.
The young artist moved to Paris in 1875 and became a marble worker. The evening classes at the Petite Ecole allowed him to have Aimé Millet and Pierre Louis Rouillard as teachers. Thanks to the latter, François Pompon discovered the Jardin des plantes.
Towards the 1880s, commissions appeared for the Hôtel de Ville de Paris, for example, as did exhibitions. The Salon de peinture et de sculpture welcomed him.
Then in 1890, Auguste Rodin hired him as a practitioner at the marble depository.
François Pompon did the same job for other sculptors, such as Jean Dampt, Antonin Mercié, and Alexandre Falguière. At the same time, he met Ernest Nivet and Camille Claudel.
The date of 1905 is unavoidable: François Pompon decides to represent only animals.
François Pompon is known today as an animal sculptor. To get to this point, Pompon was first fascinated by Eastern art, especially Japanese art. He was a connoisseur of the Louvre Museum and also liked the Egyptian art on display there. This animal-subject was, at the time, totally in fashion thanks to the numerous writings on the discovery of primitive civilizations.
After this decisive date, the forms of his animals change. They become simplified, the details are not what matter. They are modern for the 19th century. At his death, a François-Pompon museum was opened in his native town, Saulieu.
Continue without accepting >